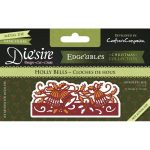 The Edge’ables range of dies have been developed to be used in a variety of ways – because the bottom and sides of the die doesn’t cut, you can line the dies up against the card spines to make statement pop-up cards as well as being used as borders or even on all four edges on a square piece of cardstock to create a frame. However they’re used, one thing’s for sure – these terrific dies will definitely add the wow factor to crafting projects!

This fabulously festive Edge'ables die is called 'Holly Bells' and can be used in a variety of ways to create beautiful, Christmassy projects.